Classic Samosas are a designer snack with:

Although samosas likely originated in Central Asia prior to the 10th century(1) and are believed to be an innovation from Pies that were first invented by the ancient Egyptians some 4000 years earlier that were passed on before their decline around 600 BC to the Greeks and Romans, the New World like its much longer predecessor period had not realized their value as a form of "socio-economic currency" as it may be said to have achieved with other pasta, bread and pastry foods more recently.

It was for example, Renaissance Cooks starting from the 14th.-century in Italy and France that developed the specialized nature of a "Patissiere" from that of a "Baker"(2). The creative period(3) in which samosas first came about and spread geographically was characterized by a high level of intellectual and cultural refinement and participatory integration pursued by the ruling dynasties of the time and their ensuing influence on the development of artisanship and skill in trades and natural science carried particularly, along the ancient "silk routes" linking East to West and North to South.

In the art prior to the Sultan of Samosas invention, classic samosa chapris or wraps like those for other similar foods e.g.turn-overs, pies, pasta etc. were characterized by unleavened, thinly sheeted dough pastry that may be semi-cooked (in the case of egg rolls or samosas) or used raw prior to cooking (in the case of pies) or hardened prior to boiling (in the case of pasta), and then used for covering or layering the product that normally consisted of meat, vegetables, spices, dry fruits, nuts etc.. In the earliest times the edible pastry casing actually served only as a form of packaging or decoration to be discarded while consuming the filling. The traditional art for preparing pastry would vary depending on the type of cereal and other ingredients used (semolina, wheat,maize or lentil flour etc.) as would the method of cooking or preparation and resulting form of the product itself(4).

The traditional art for classic samosa-making was slow and time consuming as the pastry could only be cooked one at a time. Furthermore, pastry dough normally consisting of flour, water and oil or shortening would cause a comparatively softer final product to result upon frying. If no shortening or oil were used in pastry dough, it would cause the pastry to break easily because of its inability to retain moisture through the manipulation or cooking process. Samosa-making was thus seen as a highly specialized art form with households competing for the best place among food connoisseurs.

The final product upon frying had to be very crisp, with a smooth, non-porous surface and with the retention of minimum and certainly never any excessive amounts of oil when fried. Based on the knowledge available until then(5), such quality characteristics would be difficult to achieve in the context of New World samosa production-economy imperatives associated with a business dedicated to commercializing authentic, classic style samosas as a "heritage food", at least those from the Gujarati speaking enclaves of South Asia.

This would have to be achieved by re-creating the cultural studies imperative(6) for a level of sophistication in food conception and a consumption experience that could be characterized as a "gift of history", and surviving the high cost and expectation of ensuring or systemizing its commercial success from the author's view point.

The other broad category of samosas is known as Punjabi samosas originating from Punjabi speaking enclaves of South Asia that are characterized by unleavened, thickly sheeted dough pastry that is uncooked and is used for assembling samosas.

Unfortunately, commercial pastry of use as shells and wraps for these samosas or similar products did not measure up to the quantifiable characteristics associated with traditional authentic classic samosa pastry, such as, for example, the degree of crunchiness or brittleness, elasticity, pliability, tensile strength, non-porous and smooth surface, colour, moisture and oil content, multi-specifically inter-connected as they all are, and a stack of pastries that would also be quick to triangulate or form classic samosas.

Accordingly, there was a need for a new way of producing novel pastry shells to wrap traditional, authentic, classic samosas that have or exceed the parameters in terms of physical, emotional, cultural and natural attributes or appeal which could have been expected of traditional samosas centuries earlier, and which could have been manufactured in an improved batch or continuous process in a mass produced manner in the New World economy.

Classic samosas are extremely popular throughout the entire Indian sub-continent from where they are believed to have originated.

Sultan of Samosas sells 10 varieties of samosas with a choice of delicious dips that are also prepared in-house using unique recipes. 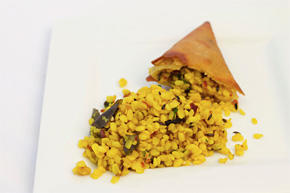 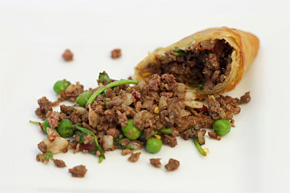 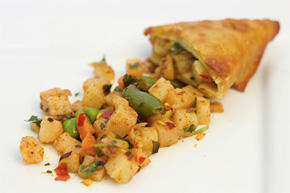 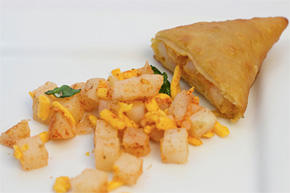